I. What is sound?

Sound is a mechanical wave that travels as both pressure oscillations and particle motion back and forth. This wave cannot exist if it does not have something to travel through – a medium such as air, liquids, or solids. Sound travels faster and farther under water than in air. In air, sound travels approximately 340 meters per second whereas in water sound can travel 1500 meters per second. The speed of sound is also influenced by temperature, salinity and pressure (or depth). Sound doesn’t travel in just one direction, but travels radially or spherically from a source. For a detailed explanation of underwater sound wave propagation, visit http://dosits.org.

II. What is soundscape ecology

Soundscapes can vary tremendously in space and time. Spatially, a soundscape can be different within a habitat, between habitats, across regions or across ocean basins. Location plays a major role in how a particular habitat sounds. Physical structure, distribution of animals, abundance of sound producing organisms, bottom type and proximity to human activities will all influence the signature soundscape of a habitat. In addition to spatial variations, soundscapes vary temporally as well. There are changes in tides and light cycles that occur on a daily basis, and which are closely linked to animal activity. On a weekly to seasonal basis, there are changes in weather, magnitude of tides and degree of human activity. A soundscape, then, is a dynamic characteristic of an environment that will be affected by spatial and temporal variations, and it is important to consider these variations when studying ecological processes and marine community structure and function. 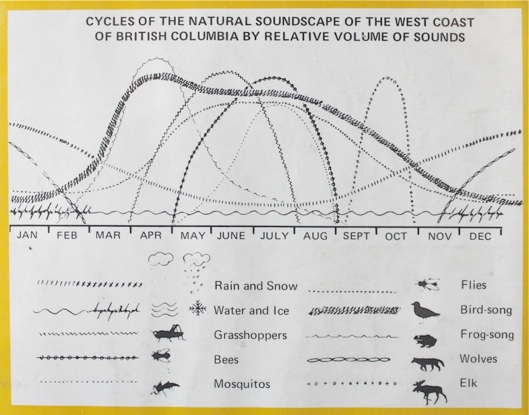 Example of the soundscape dynamics in a terrestrial forest environment, depicting annual changes in the major soundscape components (physical and biological). From humansandnature.org.

III. What are the sources of underwater sounds?

Marine soundscapes comprise a wide variety of sounds depending on the sources present in a particular environment. Sounds can be produced by both biotic, living, and abiotic, non-living, sources. Biological sounds may be produced intentionally by a variety of animals (e.g. whales, fish, crabs) for purposes such as communication, prey detection, or defense. Marine organisms can also produce a lot of sound as a byproduct of their typical activities such as swimming, feeding and burrowing. Non-biological sources of underwater sound are numerous and include waves, boats, seismic activity, fishing, hurricanes, and currents. You can listen to some common estuarine sounds (both biological and non-biological) in our audio gallery.

IV. How do we measure underwater sound? 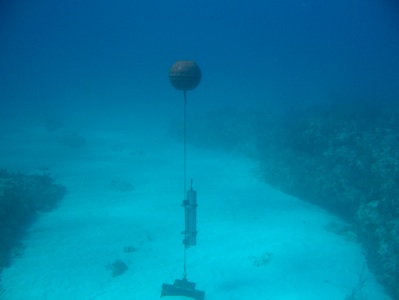 With advancements in technology, we are now able to collect extensive data to listen to environments that we had not previously been able to hear. To record sound underwater, we use a device called a hydrophone that measures the pressure changes associated with sound waves. Acoustic recorders are attached to the hydrophones and can either record sound continuously for a relatively short time or be scheduled to record at intervals over a longer time period.

Once acoustic data is collected, we can listen to the sounds, but to determine spatial and temporal variability in soundscapes we must examine the data quantitatively. When characterizing sounds we are mostly interested in sound levels (i.e. how loud is it?) as well as the frequency composition (i.e. what type of sounds are there?). If the sound sources in a recording match known frequencies and patterns, we can distinguish the different sound signatures that derive from various sources.

V. What is larval settlement and how might sound play a role?

Our study organism is the eastern oyster (Crassostrea virginica), which is a benthic, or bottom dwelling, marine invertebrate. Most benthic invertebrates, like the oyster, have a pelagic, or free-swimming, larval phase in their life cycles before they become sessile, or non-motile, adults. Settlement is the stage at the end of the larval phase in which an organism selects a suitable habitat to metamorphose to its adult form. Larvae must be able to discriminate between suitable and unsuitable habitats to locate a favorable site to settle and live out their adult life successfully. To do this, larvae use a combination of physical and chemical environmental cues to select an appropriate settlement habitat. 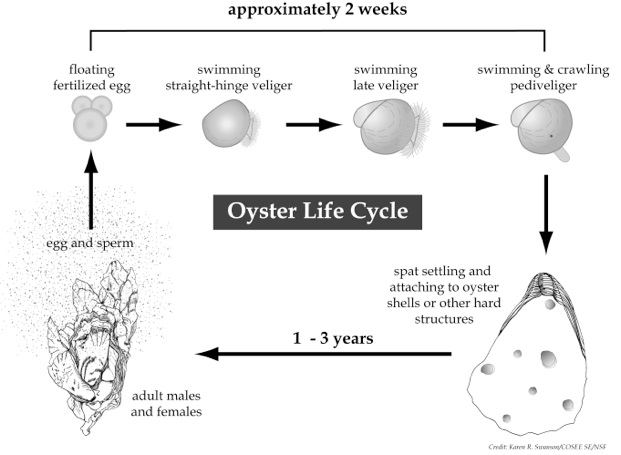 There are a variety of settlement cues that have been shown to contribute to the selection of settlement habitat by larvae of a variety of organisms. During habitat selection, larvae may respond to physical properties such as currents, depth, substrate texture or salinity, and chemical cues may provide habitat information such as the presence of certain species, the bottom type, vegetation or possible prey in the area. Most environmental cues, such as light and odor, are rapidly attenuated from the source, which means they may only be beneficial over short distances. Sound, however, is able to travel relatively longer distances, independently of currents, while carrying valuable information about the environment. These properties make sound a good candidate for a larval orientation and settlement cue, and the possible importance of soundscapes to recruitment processes is increasingly being studied.

Scientists have long studied the importance of sound to marine mammals and fish, and recent work aims to investigate the possible role that sound plays as a settlement cue for marine invertebrates. Though they do not interpret sound through ears like us, marine invertebrates have several structures that may be involved in sound reception, all of which are related to the movement of particles by a sound wave. Since we have been able to characterize differences in marine soundscapes, and because invertebrates have structures capable of detecting sound, it is likely that sound plays a role as a settlement cue for marine invertebrate larvae.

When we think of sound reception, we usually think of hearing with our ears, which are adapted to detect pressure changes associated with acoustic signals. This is true for most mammals, however when it comes to invertebrates we must think about sound detection in a different way. Since most invertebrates lack gas-filled cavities that would be required to detect acoustic pressure changes, sound reception in invertebrates likely involves sensitivity to the particle motion component of a sound wave. Invertebrates may detect particle motion using external and/or internal structures. Most marine invertebrates have external sensory hairs, or epidermal hair cells, that are sensitive to mechanical vibrations in the water. These hairs move in response to water movement, and, for example, could be used to detect the presence of other organisms in the water.

In addition to epidermal hair cells, a likely structure for sound detection for crustaceans and bivalves, including our study organism (the Eastern oyster), is the statocyst. Statocysts are found in many marine invertebrates, and have been shown to be important in orientation and positioning in the water column. A statocyst is a sac like structure lined with sensory cells. This sac contains one or more statoliths, tiny mineralized masses, that move differentially from the rest of the body in response to particle motion. When the statolith comes in to contact with the sensory cells lining the statocyst, it can transmit sensory information about the sound wave. A third possible acoustic detector that may be present in molluscan larvae is called the Abdominal Sense Organ (ASO). The ASO is a small bean-shaped organ in bivalves that has been shown to be sensitive to vibrations. This structure is not well known, but in a study of scallop acoustic reception, ASO removal inhibited the scallops’ response to sound signals. 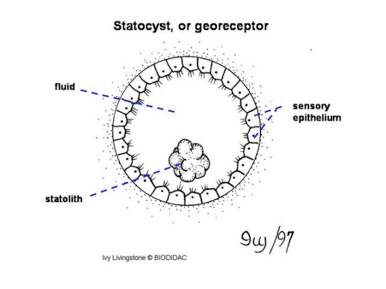 While information about the specific acoustic sensory mechanisms used by marine invertebrates is extremely limited, behavioral and physiological responses observed in a variety of species suggests that sound reception is common. Using the sensory structures described above, and potentially additional undiscovered mechanisms, it is possible that pre-settlement larvae have the capability to detect underwater sound, and can use sound as a settlement cue. Our understanding of what sound levels and frequencies are detectable by different marine invertebrates will hopefully expand as the field of soundscape ecology grows.

Montgomery et. al. 2006. Sound as an orientation cue for the pelagic larvae of reef fishes and decapod crustaceans. Advances in Marine Biology 51:143-196.