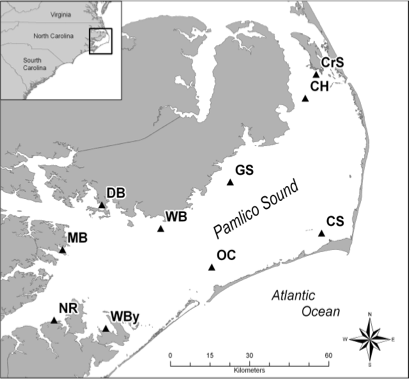 Our NSF-funded soundscape ecology research at NC State University uses multiple approaches to explore whether habitat-related soundscapes serve as a settlement cue for marine invertebrate larvae. The overarching questions we seek to address in these studies are:

In 1996, a network of subtidal no-take oyster reserves were established by the North Carolina Division of Marine Fisheries across Pamlico Sound (see map). These hard substrate structured oyster reefs provide habitat for a distinct community of fish and invertebrates compared to the surrounding unstructured soft bottom. These reserves serve as a useful system for us to compare the habitat-related soundscape at multiple spatial and temporal scales.

We use several complimentary approaches to measure the habitat-related soundscape in our system over space and time to address objectives 1 and 2. This includes simultaneously measuring oyster reef and soft bottom soundscapes to directly compare the acoustic characteristics of adjacent sites, as well as making measurements at increasing distances from reef environments to examine how reef-associated sound propagates. We are also conducting long-term recording surveys to see how reef and off-reef sounds change over different time scales (e.g. daily, monthly, seasonal patterns).

Hydrophones with acoustic recorders are deployed to measure sounds in different habitats to compare the acoustic characteristics between nearby locations. 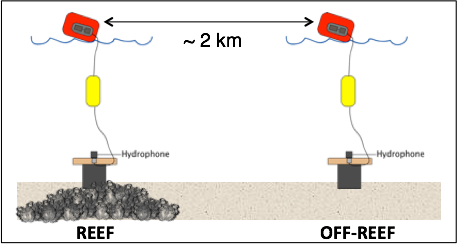 To investigate how sounds change as we move away from the reef, hydrophone recording systems are used at increasing distances from the reef edge as depicted in the schematic below:

A third acoustic characterization method we have developed is the use of a drifting hydrophone. This system is meant to record the soundscape from the perspective of a passive drifter like our study organisms! We release the drogues a few hundred meters from a reef and let it drift across the different habitats. This method gives us detailed information about what larvae may experience depending on where the currents take them and allows us to evaluate how closely associated the changes in sounds are with changes in bottom habitat type.

Our soundscape studies are establishing that different estuarine habitats, such as oyster reefs and soft bottoms, have distinct acoustic characteristics. Oyster reefs harbor many sound-producers, such as snapping shrimp and toadfish, that are not present on the off-reef soft bottoms, and we are finding reef soundscapes to show higher acoustic diversity than nearby off-reef sites. Some reefs are quieter than others, and they can be different in volume from month to month, but in general they have consistently higher sound levels, especially at frequencies associated with invertebrate-generated sounds. Listen and compare for yourself one of our reef and off-reef recording pairs in the audio gallery.

Lillis A, Eggleston DB, Bohnenstiehl DR. (2015) Soundscapes and larval settlement: characterizing the stimulus from a larval perspective. In: Popper A, Hawkins A, editors. The Effect of Noise on Aquatic Life II. New York.

Our soundscape characterization studies are establishing that oyster reef habitats produce a distinct sound signature compared to other estuarine habitats, and that this habitat-related sound has suitable characteristics to serve as a good signal for settling planktonic larvae. To test whether larvae of common reef and off-reef species respond to the sound characteristics of the habitats, we have and continue to carry out laboratory and field experiments. Currently our species of interest are bivalves: the Eastern oyster (Crassostrea virginica) and the hard clam (Mercenaria mercenaria). These two species offer an interesting comparison because oysters prefer to settle into oyster reef habitat, and require a hard substrate on which to attach permanently, whereas clams are able to settle in a variety of soft substrates and are somewhat mobile as adults.

To test the hypothesis that habitat-related sound will affect larval settlement, we carry out laboratory experiments in which sounds recorded in oyster reefs and soft bottom areas are replayed to larvae in experimental tanks (as shown in the schematic below) and settlement is compared among different sound treatments.

Because it is very difficult to accurately reproduce the natural soundscape within a lab tank, we also use field experiments to test the results of lab experiments. In these experiments, cultures of larvae are suspended over reef and off-reef environments, but in containers that do not allow any cues to pass through except the sounds that are produced in the habitats. Settlement levels can then be compared between larvae that were exposed to the different sounds.
Laboratory Experiments

To test the hypothesis that habitat-related sound will affect larval settlement, we carry out laboratory experiments in which sounds recorded in oyster reefs and soft bottom areas are replayed to larvae in experimental tanks (as shown in the schematic below) and settlement is compared among different sound treatments.

Experiments to test whether clam larval settlement are influenced by habitat sounds are ongoing, so stay tuned for the results of that study.