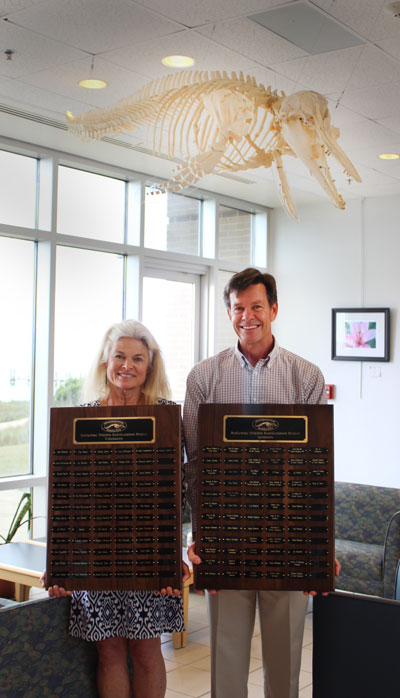 “Josie,” a re-articulated bottlenose dolphin skeleton, is the newest addition to the CMAST family, now flying high in our lobby after a long journey from sea to ceiling.

CMAST’s Dr. Vicky Thayer, Skeleton Crew Rearticulation Project Coordinator, saw the project through from inception to completion when it was mounted in the CMAST Lobby in May 2016. The skeleton work has been in progress since 2010. Sixty-four generous contributors who “bought bones” funded this project, along with Dr. Thayer and Keith Rittmaster of the NC Maritime Museum, who purchased bones and contributed materials towards the project.

“Josie”–so named after one of the biologists who worked on the project, Josh Summers–was a 255 cm long mature female bottlenose dolphin that stranded on Ocracoke in December 2009. The necropsy team found that the dolphin had a stingray spine in the right lung which contributed to the cause of death, but the animal also had severe dental attrition and rib fractures.

Josie began pulling her weight as an educational agent right away, as she was necropsied on January 30, 2010 for a marine mammal stranding response training event with personnel from various organizations: NC State College of Veterinary Medicine, NC Maritime Museum, Duke University Marine Lab, and many local volunteers.

The skeleton was labelled and buried the same day, January 30, 2010 at the NC Maritime Marine Museum’s Gallant’s Channel site in Beaufort. Burying the skeleton facilitates the cleaning of the bones. The skeleton was exhumed on October 23, 2011 with help from Dr. Thayer’s Carteret Community College Environmental Biology class.

At this point, the skeleton construction began in earnest. It was a labor of love performed by a cast of many. Sixty-two volunteers worked on this project from 2009 to 2016.

Josh Summers did the lion’s share of the work on the reartiiculation, particularly the rib cage and drilling vertebrae. Mr. Summers, along with Mr. Rittmaster are experts in the field and have rearticulated many whales and dolphins of all sizes; they knew what was needed in materials and labor. Dr. Thayer said one of the biggest challenges of the project was gathering experts such as Rittmaster and Summers as well as finding willing amateurs who put in hours being trained and working with the skeleton. 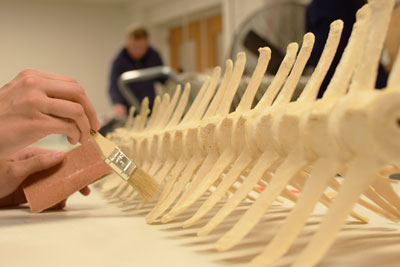 Book binder’s glue was used to seal the bones of the skeleton.

The bones were transported back to the NC Maritime Museum and were soaked in hydrogen peroxide, dried, and then each bone was painted with three coats of book binders glue. East Carteret High School and Carteret Community College students weighed each bone and labelled them. Stainless steel rods were bent in the position that Dr. Thayer and other experts envisioned would represent a diving dolphin. Each vertebra was drilled. Foam circles were inserted between each vertebra and glued to each vertebra. The hyoid bones and chevrons were drilled and attached to the skull and vertebra with wire. The skull was drilled and a piece of wood was glued to the occipital condyles and a stainless steel rod was attached so that the skull could be attached the cervical vertebra.

The skeleton was constructed in modular parts for easy and safe transportation. Pieces of plexiglass were cut to represent the pectoral fins, and the radiographs were traced onto the plexiglass so that the pectoral fin bones and radii humerii and ulnae could be glued to the plexiglass in the proper positions. The teeth were glued in position. The mandibles were attached to the skull and multiple hanging points were attached in the ceiling. Stainless steel cable was attached to the skeleton and to the hanging cables.

The final push for the completion of the skeleton occurred in the spring of this year, when our Semester @ CMAST students, CMAST Director Dr. Dave Eggleston, Josh Summers, Keith Rittmaster, and Dr. Vicky Thayer brought the project across the finish line. 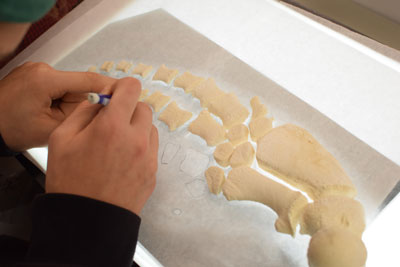 Radiographs were made from the pectoral fins, and bone shapes were traced on plexiglass. The bones were then glued to the plexiglass in the indicated locations.

“My favorite part of this project,” said Dr. Thayer, “was seeing the incredible attention to detail, engineering, ingenuity and repurposing that was required to make this happen. I have a new appreciation of skeletons of all sizes and shapes in museums everywhere after coordinating this project.”

The skeleton is a striking addition to the CMAST lobby. It is hoped that Josie will be joined by an adult sea turtle skeleton and whale skeleton sometime in the future. 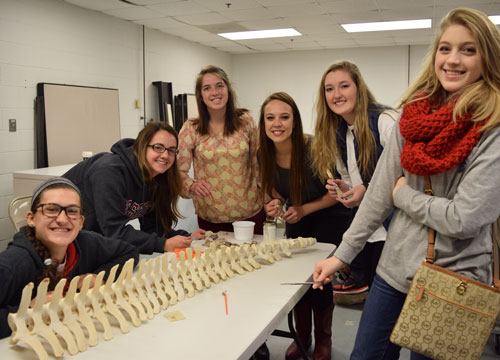 The 2016 class of the Semester @ CMAST students were instrumental in the final push for completion of the skeleton.

The animal was necropsied, the skeleton flensed and buried.

The bones were exhumed and cleaned.

The bones were soaked in ammonia.

Bones were degreased at the NC State College of Veterinary Medicine. The pectoral fins were radiographed and the bones were weighed.

The bones were soaked in hydrogen peroxide, painted with book binder’s glue, put in order, weighed, and numbered.

Holes were drilled through vertebrae.

A purposefully bent stainless steel rod was inserted through the vertebrae. Foam was cut and glued for epiphyses between each vertebra. Teeth were placed and glued in the jaw. Plexiglass was cut for pectoral fins; radiographs were traced onto the plexiglass and then the pec bones were glued into place as per the position markers. Hyoid bones and chevrons were drilled and attached. The pelvic remnants and the stingray spine were attached. Washers and cables were cut for hangers.

Donor and volunteer plaques were designed and ordered.

The skeleton was hung and unveiled in a ceremony.

Dr. Thayer would like to add that this effort could not have been accomplished without the help, dedication, tireless efforts and inspiration from Dave Eggleston, Josh Summers, Keith Rittmaster, Nan Bowles, Verena Lawaetz, the class of 2016 Semester @ CMAST students, and all the generous donors and volunteers.