This article first appeared in the Department of Food, Bioprocessing and Nutrition Sciences Digest 2016, by Suzanne Standard.

Ask most anyone involved in North Carolina’s seafood industry if they’ve crossed paths with Dr. David Green, and chances are the answer is yes.

Green wears a number of hats–director of the NC State Seafood Laboratory, founder and former director of the Center for Marine Sciences and Technology (CMAST), professor of food science, department Extension leader–but the most important one is a title you won’t see listed on his CV: Champion of the North Carolina seafood industry.

“For the last 30 years, Dr. Green has selflessly devoted his career to helping the seafood industries of North Carolina and beyond,” said Dr. Chris Daubert, FBNS department head. “He has staked a career on adding value to fish and fishery products through research, education, and training support for industry in value-added product innovation and branding techniques. He is an exceptional faculty member, and his programs have had a significant impact on the state’s seafood and food manufacturing industries.” 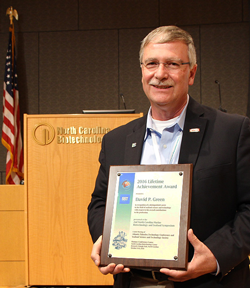 Dr. Green received a Lifetime Achievement Award in 2016 from the Atlantic Fisheries Technology Conference and the Seafood Sciences and Technology Society of the Americas.

In fact, Green is known worldwide for his innovative outreach programs and for bringing recognition to food science. He has won a number of awards, including a recent Lifetime Achievement Award fro the Atlantic Fisheries Technology Conference and Seafood Science and Technology Society of the Americas. He has served as chair of the IFT Aquatic Food Products Division, editor-in-chief of the Journal of Aquatic Food Product Technology, and is a long-time member of the steering committee of the National Seafood HACCP Alliance for Education and Training.

Green also helped establish the Marine Science and Education Partnership, a ten-member institutional partnership that was shown in 2004 to be directly responsible for over 3,000 jobs and $127 million to the local community.

As he prepares to retire, Green reflects on the last three decades and looks ahead to the future of North Carolina’s seafood industry.

You’re about to retire after a very impressive 30+ year career with CMAST and the Seafood Lab. What would you say are your biggest professional accomplishments? Along those lines, what do you think are the organization’s greatest achievements during your tenure?

Probably my biggest professional accomplishment was creating a tenure-track faculty position with two professional staff positions at the Seafood Lab in Morehead City. This accomplishment was made possible only through the efforts of stakeholder groups including the North Carolina commercial seafood industry and government agencies who recognized the value in education and training programs, technical services and applied research. Support provided by the NC General Assembly for the Seafood Laboratory at Morehead City established the foundation on which later professional accomplishments were made possible.
By far, the greatest organizational achievement was establishing the NC State University Center for Marine Sciences and Technology (CMAST) in Morehead City. CMAST gave NC State University a footprint on the coast that enabled campus-based faculty, professional staff, and students to have a base of operations for conducting field investigations and delivering course work not previously available to them. In addition, CMAST helped forge stronger partnerships with stakeholders and other marine science and education institutions such as the UNC Institute of Marine Sciences, Duke University Marine Laboratory, NOAA National Marine Fisheries Laboratory, NC Community College system and multiple state agencies including NC Division of Marine Fisheries, NC Shellfish Sanitation and Recreational Water Quality Section, and NC Department of Agriculture and Consumer Sciences, among others.

You were instrumental in getting the NC State CMAST facility built and served as the first director. And I understand that Frank Thomas was an important mentor, especially during that time. What was it like getting such a big venture off the ground? 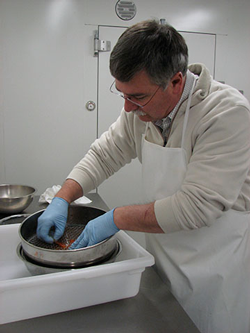 Dr. Frank Bancroft Thomas was the first seafood extension specialist in the Department of Food Science. He was responsible for establishing the Seafood Laboratory beginning in the early 1960s. Dr. Thomas wanted to put food science expertise in the hands of those who needed it most—members of the seafood industry in coastal North Carolina. He, along with graduate advisor Dr. Tyre C. Lanier, were my mentors, colleagues, and life-long friends. They gave me the self-confidence to launch CMAST. The experience was unsurpassed in anything I had done before and the skills acquired have served in other endeavors throughout my career. Whenever I was in doubt about an important decision, Dr. Thomas would say, “You have studied your entire life for this opportunity, just go and do it.” I used this approach often over the years to the chagrin of some to move the bar higher and farther than ever before.

You’ve served on a number of state-, national-, and international-level project teams. What does this work mean to you?

No one person can do everything, especially in addressing problems that require a multi-disciplinary approach. Working cooperatively on project teams means listening, learning, and recognizing others who have the same professional goals and desire to solve complex issues. The opportunity to participate on a number of state and national project teams has broadened my perspective and increased my program visibility more than was possible before. It raised the bar such that others seek out your input and review of their programs. This in turn provided a wealth of knowledge and innovative ways for addressing local issues in my own programs.

The old adage, “think globally, act locally,” still applies today. The best approach to do this is to engage in project teams that require multi-disciplinary expertise to address the complicated issues of today. A case in point was establishment of the Trans-Atlantic Fisheries Technology Conference, a joint meeting of three regional associations that meets every third year rotating between North America and Europe. The networking opportunities and resulting personal relationships on an international basis have been invaluable to the development of my state Extension program.

It seems that you’ve been involved in Cooperative Extension for most of your career, capping it off as Department Extension Leader, and you’ve also been very active in a number of associations. Why is Extension and outreach so important to you? 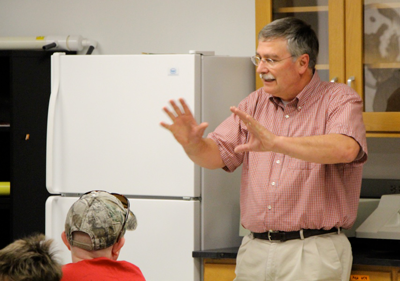 Dr. Green delivering a presentation during a seafood safety workshop.

Extension and outreach is important because it “puts knowledge to work.” We often hear about a new discovery or an important study but the real measure of success is applying that knowledge in a way that benefits society. Cooperative Extension was founded within the Land Grant system on the premise of extending research-based knowledge to stakeholder groups.
Being an active member on a number of state and national Extension associations has been invaluable. It has allowed me to learn from the success of other subject matter specialists and associates. It has given me the opportunity to recognize the contributions of others. And it has provided the opportunity the develop personal relationships necessary to address stakeholder needs. The key to success in any program is based on networking, and Cooperative Extension provides education and training opportunities for those individuals who want to succeed in their programs no matter what subject matter or issue of importance.

What is your vision for the seafood industry—its needs now, and what you’d like to see happen in the future?

The needs of the seafood industry have changed over the past 30 years but in some ways it has not changed at all. When I first expressed a desire to work in the seafood industry, I was told to go back to school and get as much education as possible and then return to help the industry. What I have learned over the years is that knowledge alone is not sufficient to address the issues facing industry and impact positive changes. Solutions must take into account social, economic and political considerations as well. The second important realization is the industry is made up of many small family businesses. Dr. Lanier once told me that “being a small fish in a big pond is better than being a big fish in a small pond.” What I would like to see happen in the future is for the North Carolina seafood industry to realize it must adopt technological change more readily and recognize that their future depends upon working together as small fish to compete with the big fish in the world market of today.